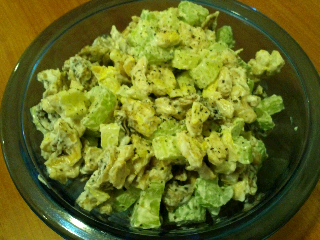 It's been a rough several weeks. The hubby was suffering mightily, and finally underwent surgery.

Then he stayed home and recuperated in a large, centrally located recliner. Recuperation entailed asking, about once an hour, "Whatcha doin'?"

He went back to work Monday. Our marriage survived. I need therapy.

Overlaid was the bizarre two months I've spent building and manning our local haunted forest -- a charitable fund-raiser that consumed many days of my life, and forced me to wrestle with group meals in the chilly, wet woods, which meals consisted of largely of hot dogs, Fritos, and chili.

During this long, dark night of madness, I've managed to stick to the vegan thing -- albeit with a couple of not-likely-to-be-repeated sidesteps -- but staying raw has been tougher. I managed to resist the slaughterdogs and the carne in the chili con, but Fritos? When I'm hungry, cold, tired, and wet? Yeah. I did partake.

So now that husband is out of the recliner, and self is out of the woods -- literally -- I've hit the reset button. My weight has wandered up and down in a plus-or-minus-five-pounds range, but now it's time to shed the last 30 pounds.

My favorite grocery store has a deli selling cashew chicken salad that I love, love, love -- particularly because it's swimming in freshly-ground black pepper! It's a little sweet, a lot peppery, chewy, crunchy, and altogether weird. The idea of this salad has been niggling inside my brain for months now, and I've finally discovered a way to replicate it, raw vegan style. The biggest hurdle? Emulating the chewiness of chicken. Then I had a Eureka! moment. Leathery banana chunks!

Dehydrate at 117 degrees for about 14 hours, until bananas are leathery on the outside, but still soft on the inside.

Refrigerate in a sealed container. These chunks will probably keep 100 years, and can be used in place of chicken in recipes that combine sweets and savories.

VEGAN MAYONAISE
I tried this first using Vegenaise®, a way-overpriced but seriously yummy commercial vegan mayo. You'll find it in the refrigerated aisle of stores with a well-stocked health-food section. Note the inexplicable spelling.

But I'm a cheapskate, and had to find a less-expensive way to get my mayonaise fix. Almond Mayo, at this link, did the trick.

Combine equal parts banana chunks and chopped celery, with a half portion of cashews. Toss with mayo and seasonings. Then add even more fresh ground pepper!