Today's random act of stupidity: I drove my car into a mud pit. Yes, I did. And got stuck there. (Oh, I could blame the construction workers, or the sign makers, but let's be honest: I'm living proof that college doesn't make you smart.)

So I called Triple-A, and settled in for a long night of...well...being settled in mud. Then I conducted a resource assessment.

Step one: Check batteries. Phone battery? One backup. Car battery? Good for an hour or so of reading.

Step two: Clothing. Check. Found a pair of warm gloves under the seat, leftover from the haunted forest. 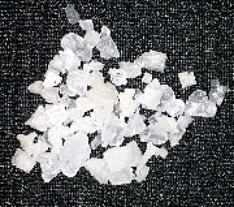 Step three: Food. My daughter's box of energy bars contained only a deck of cards. But what have we here? A big bottle of sel gris...French gray sea salt. Oh...kay!

But, you say, salt's bad for you! Salt raises blood pressure, causes hypertension and strokes, and kills people!

Turns out, not so much. (Unless you're a rat from the early 70's eating 60 times the average salt intake of a 200-pound human being. If that's you, then sure, cut back on the potato chips.)

For the rest of us, cutting down on salt can actually "worsen health outcomes." Here's the truth about restricting your salt intake: "The less salt people ate, the higher their levels of a substance secreted by the kidneys, called renin, which set off a physiological cascade of events that seemed to end with an increased risk of heart disease. In this scenario: eat less salt, secrete more renin, get heart disease, die prematurely." (1)

So how did I spend my evening in the mud? Munching some sea salt, reading a book, Facebooking, and -- when Triple A was a no-show -- being driven out of the mud pit by my heroic husband, who trudged through mud and water to rescue me.

All in all, not a bad night.